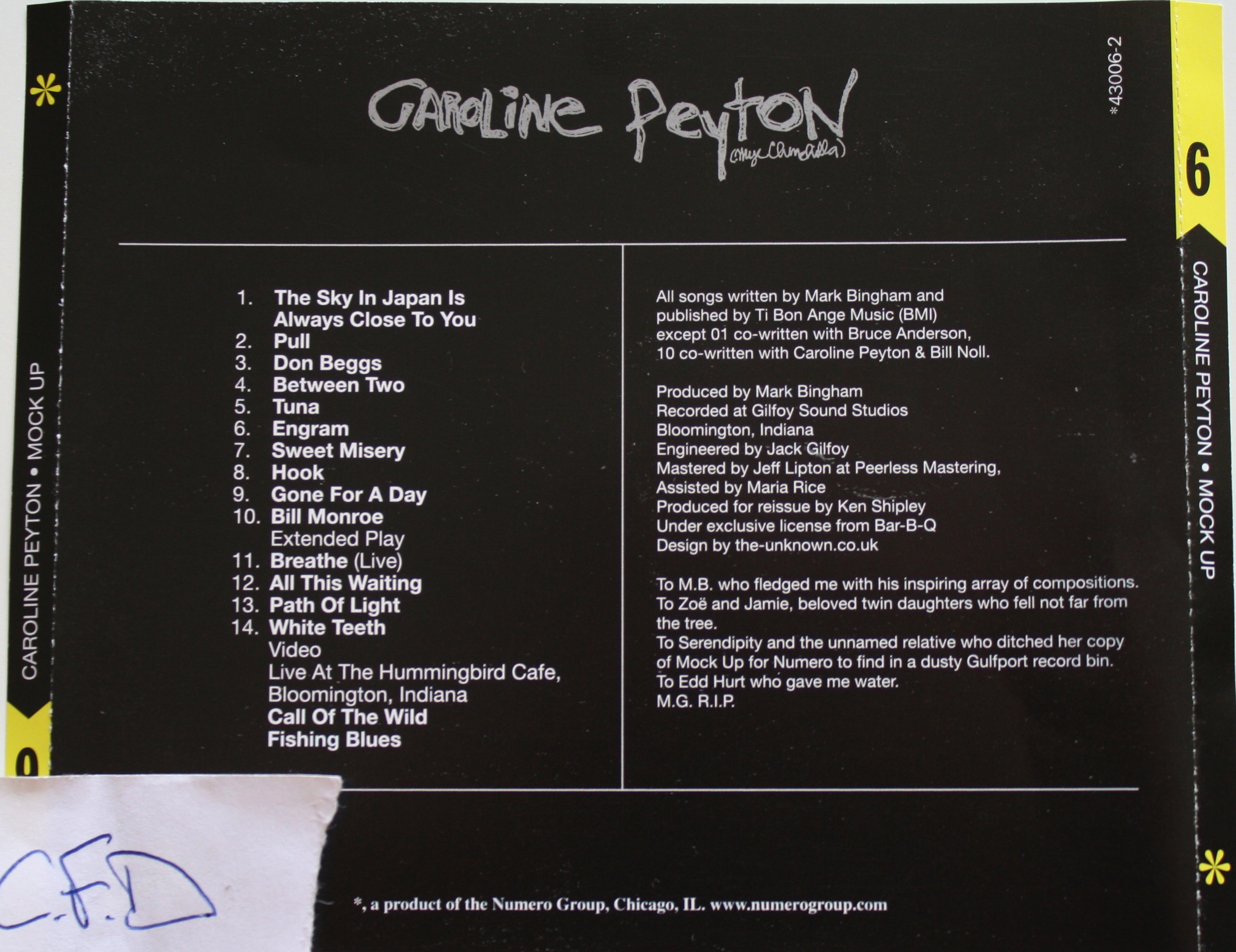 Bloomington, Indiana in 1972. It is seldom listed among the most groundbreaking music scenes: Detroit in 1962, New York in 1976, Minneapolis in 1982, Seattle in 1989. But while the coasts were putting the hippie dream to bed, it was still burning bright in supposedly behind-the-times pockets of the Midwest. And it was inspiring some unholy unions, such as that of Caroline Peyton, vocally gifted goddaughter of William Styron who turned down acceptance to the Boston Conservatory of Music to immerse herself among Bloomingtonís musical bohos, and Mark Bingham, a jazz-and-acid-but-not-acid-jazz aficionado who was fired as an Elektra Recordsí in-house songwriter, allegedly for not being commercial enough. Ejected from California back to Bloomington, Bingham helped found the Screaming Gypsy Bandits, an offbeat experimental collective that was more about music-backed freak-outs than actual music, and would puzzle and repel most of todayís freak-folk proprietors. Peyton and Bingham met at the Needmore Commune where they were both residing, and they quickly became lovers and mutual muses. Quite fortuitously, Needmore’s well-off owner was throwing some, but not enough, of her money into a fly-by-night upstart record label, meant to document the frazzled sounds coming out of Bloomingdale. The label had no staff or promotion.

It is telling that its anticipated first release, a Screaming Gypsy Bandits record, was scrapped because the band could not muster enough sobriety to record. Instead, Bar-B-Q debuted with Caroline Peytonís Mock Up in 1972, shortly after Peyton and Bingham returned from a hitchhiked road trip to California, a failed attempt to make music industry contacts. Mock Up validates their boho mythology: one can imagine Peyton not hitchhiking, but twirling her way to the Golden State, her frilly, ankle-length dress scraping along dusty desert roads, Bingham literally tripping a few steps behind. With Peyton singing and playing guitar, Bingham producing and writing, and all sorts of Bloomington buddies jamming along, most notably versatile pianist Mark Gray, whose shimmering chords enliven the weaker moments, Mock Up can today be seen as a historical snapshot of the Bloomington scene. Unfortunately, it is fascinating more as history than as music, as the record is infuriatingly uneven, often dull, occasionally excruciating. With no commercial aspirations in mind, Bingham and Peyton refused to check their indulgent tendencies at the door: “Bill Monroe” is two horrendous minutes of various animal noises, bound to terrify its namesake, and “Don Beggs” overpowers the listener with obnoxious glass-shattering operatics. Too many songsómost notably the opener “The Sky in Japan is Always Close to You” are plodding and pale Joni Mitchell imitations. In fact, Peyton almost prophetically predicts Mitchellís eventual jazz fixation. Mark Bingham is a proud jazzbo, and his compositions owe more to jazz experimentalism than pop formula. While an interesting conceit for music theorists, for the average pop listener, it drags the songs into the muck. Only when the songs get upbeat and funky do Peyton and Bingham deliver any serious energy. “Pull” and “Sweet Misery” are steamy Peyton & Bingham duets, where the funky, wild sexual tension is palpable. Peytonís voice could convey exquisite sexiness, but aside from a couple provocative lines “I’ll pull it right out of my pants”, – “Dreamed and schemed and creamed in my jeans” – she’s more content to sound like a wigged-out Judy Collins, singing Binghamís hallucinatory non sequiturs with a conviction they do not merit, as if they mean something. Mock Up, like acid-freak creations before and since, has moments of exquisite beauty and obnoxious indulgence. But even with most of its songs achieving some sort of structure or listenability, it is at best an acquired taste for a limited audience, and at worst, a druggy mess that encapsulates every pejorative association attached to the word “hippie.”

Mock Up’s failure, it should be noted, is more Binghamís than Peyton’s. Peyton is a phenomenal singer: her voice a multi-octave, scale-soaring instrument. But Bingham’s material sells her short. Nevertheless, Mock Up’s potential scored Peyton, Bingham, and Gray an ultimately unsuccessful audition for Clive Davis.

After a sojourn in Albany, Peyton and Bingham found themselves back in Bloomington, their romantic relationship over but the professional relationship inexplicably persevering. Out of this ennui came Intuition, a record begun in 1974 but not completed until 1977, a far cry from the two weeks it took to knock out Mock Up. The extra time evinces Intuition’s commercial bent, detectable from the slick guitar chords that open the album. This is Peyton’s bid to be a pop star, one in the vein of Linda Ronstadt, Maria Muldaur, or Bonnie Raitt. She had the voice for it: after five years, her voice was more controlled and melodious, free of the showoffish, freaky affectations that marred Mock Up’s most off-putting moments. She offers a light-hearted twangy lilt to “Still with You”, her catchiest song by a mile, and slays soulful blues numbers like “Together” and “Donkey Blues”. Even her folk ballads (“Call of the Wild”, “Light Years”) are more lucid than the knotty, murky performances on Mock Up. But there is still a sense that the material is lacking. Despite his increasing involvement in other projects, and decreasing involvement in Peyton’s romantic life (she eventually married), Bingham once and again wrote and produced the album, and the pop songsmith hat, as Elektra founder Jac Holzman had noticed a decade earlier, doesnít really fit him. Bingham’s songwriting is still too unfocused to sell Peyton’s remarkable voice, which would better suit more streamlined pop fare. His compositions seem bored with themselves, as though embarrassed by this trite pop exercise, nowhere more so than the bandwagon hopping disco cut “Party Line”. On Intuition, he prizes an almost knowing blandness over jazz-folk ethereality, and the result is a more accessible but almost equally disappointing record.

Alas, Intuition was recorded in Indiana, and released on Bar-B-Q. Thus, its pop aspirations were little more than wishful thinking: despite a write-up in Rolling Stone, the disc tanked, and Bar-B-Q folded shortly after. Both Peyton and Bingham took the more mercenary routes to success that so enamored thirty-something hippies as the ’80s dawned: Peyton as a theatre performer and Disney vocalist, Bingham as a working songwriter. But musical movements are a cyclical beast, and with experimental hippie folkies once again a hot property for independent labels, it is an opportune era for Peyton reissues. In the hope that the Banhart-and-Newsom-nation will anoint Peyton the next undiscovered treasure of yesteryear, the Numero Group has reissued her two ’70s albums with extensive, insightful liner notes courtesy of Edd Hurt, a generous supply of photos, and of course, extra tracks. Those on Mock Up are worthless. “Breathe”, a live Screaming Gypsy Bandits recording, affirms that Bingham did indeed abandon many of his worst excesses for the recording of Mock Up. It is a monotonous, endless eight-minute dronefest guaranteed to clear a room faster than Metal Machine Music. And “White Teeth” is a blathering tabla-and-sitar workout that takes a long time to do nothing. But perhaps the saddest afterword to these overlooked discs are the Intuition outtakes, which include “Shake Down”, a robbery narrative that marks Bingham’s most sustained lyric and Peytonís toughest vocal (why it was omitted from the album is a lingering question), and five acoustic demos of non-Bingham songs. Unsurprisingly, these offer a tantalizing glimpse of what could have been, had Peyton cut the ties with Bingham earlier. Peyton’s own songs, especially the beguiling “Mother Nature’s Deal” and the moving “Try to Be True”, are gorgeous meditations on life and love that would have easily earned her a spot among the California singer-songwriter set, free of the meandering defiance of form that tripped up Bingham.
Honestly, it is difficult to imagine these recordings finding many new fans today: Peyton’s music is strictly of its time and place, and only rarely transcends that. Thus, listening to these albums is like pining through library archives on some vast research project: itís informative, occasionally compelling, seldom fun. Without the commune backdrop or the copious drug consumption that informed their creation, Mock Up and Intuition are tough to enjoy, and if they live on at all, they will do so only as curiosities.