You know how in the last few years the bolts on the wheels of big trucks have turned into spikes and fancy chrome-plated things?  Turns out those aren’t shiny metal objects but just lightweight plastic bolt covers.  Also turns out that the spring-loaded plastic bollards used to delineate bike lanes are at exactly the right height to knock them off.  (If you want a mix-and-match set of bolt covers check out East Marginal Way between downtown and Spokane Street – there’s one about every twenty feet.)

A month ago I read this strata post by Jan Heine, the Bike Quarterly guy: “Amazing course so close to the city – thank you Steve for scouting it.”  In the comments he noted that no permits were required and that the roads were  all open to the public even though it cut through the watershed.  It’s not quite the opening of the Cedar River Trail to Rattlesnake Lake, but I’ve never found a route to Snoqualmie / North Bend that goes east of I-90 so I was intrigued.

I suspected that route finding would be more than Jan let on, so I plotted a route in Ride with GPS and annotated it with river and road crossings just before turns.  In fact the route was pretty simple – out 208th to the crux of the route, a turn onto 364th to get over the ridge.  Then Rattlesnake Rd. out to Highway 18.  Here’s the loop:

I took the studded tires off of the Rodriguez and replaced them with 42mm Continental SpeedRiders – maybe three years old but still lots of tread left.  I set out early with a water bottle and two kind bars, and here’s my ride.

I was looking for a T intersection on 208th and didn’t find it.  The river crossing shown on the map just before that turn is less than obvious.  I figured that the road heading uphill behind the yellow metal gate was probably the route and since I had plenty of time I figured I’d give it a try before backtracking.  The road was better than it looked at the beginning but rocky.  The climbing wasn’t particularly steep and I was waiting for the work to start when I hit the crest and started down.  I must have hit a rock or something just before the first switchback because suddenly my front tire was hissing and I knew I had a puncture.

I couldn’t find anything to lean the bike up against so I turned it upside down and removed front wheel.  I rolled off the tire and found a slice, across from the valve stem, about half-an-inch long.  I pulled off my saddle bag to get a new tube and found that there weren’t any tubes there.  I had forgotten that when I mounted the studs I’d taken the tubes from the saddle bag.  Okay, I thought, I’ll just patch the tube and try to miss the rocks.  The patch kit had a full tube of cement with the seal unbroken – but when I opened it the tube was full of air with a small plug of dried cement at the bottom.

So this was an interesting situation: I was 45 miles into my ride, about 10 miles from Issaquah-Hobart Rd., I wasn’t sure I was on route, and I wasn’t going to fix that tire with the stuff I had with me.  I looked at my phone – it was a little after noon and I had no signal.  Neither Google Maps nor Strava could show me anything about my position.  The first question was whether to continue on the road I was on or to backtrack.

I decided to continue, thinking that there was a pretty good chance that I was on route and besides I was heading in the right direction.  The road leveled out and then started to descend and after the first switchback I started thinking about having to spend the night and pulled out my phone again to turn off the GPS apps.  I saw that after the crest I had a signal, so I called Odette and asked her to come pick me up on Highway 18, not mentioning that I wasn’t sure where I was or if I was on the right road. I wasn’t sure I was where I wanted to be until I came to a T intersection and had to decide which arm to take – Google maps said I had reached Rattlesnake Rd. so I knew  I was about 4 miles from the road I’d asked Odette to meet me at.  A mile or so later and she called me to say she was there – I heard the chime of a text but didn’t check the phone until the next mile marker.  She drove up Rattlesnake Rd. for half a mile until stopped by a gate at a big substation so my walk was a little shorter than expected.  Good thing I’m married to somebody who will drop everything to come bail me out when I get into trouble – that’s twice so far this year!

I’ll return and ride that route clean.  It’s a beautiful forest, the climbs are actually pretty easy, it’s a nice connection that I didn’t know was there – just keep an eye out for rocks.

Photo is in front of a new house – I ought to do a post about that some time.

It’s really too bad that Seattle doesn’t have a group to advocate for the interests of cyclists.  I gave up on CBC when they sold out on the Burke Gilman missing link route,  but opening this event to electric scooters means I’m done with it. 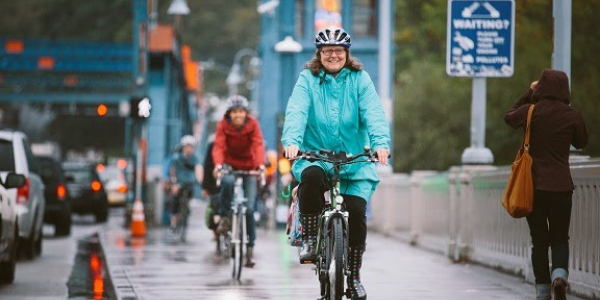 There’s no doubt that autumn has arrived in the Pacific Northwest. Why not enjoy the season to its fullest by keeping active outdoors? The view of changing forest colors, dramatic fog, and that crisp fall air are reason enough to hop back into the saddle. However, we’ve got something to really motivate you to ride when the rain, the wind, and the cold might drive you to stay indoors: The Ride in the Rain Challenge! 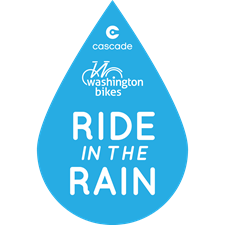 Are you ready to ascend the ranks on the leaderboard? Let’s talk points! Points are granted for two modes:

You get points for:

We’ve also got some great prizes in the works and can’t wait to tell you more about it soon.

“We recognize this has been an unsettling week for members. The sale of MEC’s business, and the decision to move the business away from the co-operative model was, after all, a very difficult decision – but it was the right one. Facing a stark choice, we chose to preserve employment opportunities, a larger store presence, and a commitment to MEC’s ethos rather than fold up the MEC tent for good.”

Here are my Strava stats for July:

Way off the 50-miles a day pace I had in the second quarter – look at the bar chart:

The explanation is that Odette retired on June 30 and we closed on a new house on July 15.  I figure I’ve got another week or two of work to get out of the old place and then maybe I’ll ramp up again, or maybe not – I foresee a lot of energy going into getting the new place organized and set up the way I want it.

Sound Transit strikes again!  Not really a surprise, but no process, no warning, no real consideration of the disruption caused.  Conflict in construction zones seems to be worse with private contractors, but inconsiderate blockage of critical routes seems to be the purvey of Sound Transit

So…. you apparently can no longer exit the pipeline trail at 133rd to get to W. Snoqualmie Valley Rd.  (because there are new “Private No Trespassing signs on the gate.)  You can walk down to the highway through the brush on the pipeline corridor – but I’m not sure that it’s recommended.