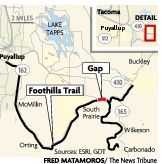 Pierce County is closing in on the last two properties that would put the South Prairie-to-Buckley segment of the Foothills Trail into public ownership.

The two properties constitute about a mile-long gap in the four-mile segment that follows an abandoned railway bed. Once the main railway route between Tacoma and Chicago, it is now a narrow corridor of grass and occasional thick underbrush.

When completed, the entire Foothills Trail could extend for 301/2 miles, including the 221/2-mile main trail connecting Puyallup with Buckley and an eight-mile spur from near South Prairie to Wilkeson to the edge of Carbonado.

Grant Griffin, trail coordinator for Pierce County Parks and Recreation, said he hopes to have trail construction under way on the two “gap” properties by next spring.

That timeline comes as a surprise to the owners of the two properties who have been negotiating off and on with the county for more than a decade.

He said he had an informal agreement with the county to take the trail around his land along a portion of Highway 162 and then drop it down through the end of his property to the railroad right of way.

Now, Partin said, the county is talking about cutting across his RV park, which he said he will fight.

Partin said the issue is security for the 106 people who call his 36 acres home. They live there permanently. He said a public trail cutting through their neighborhood would not be safe, especially for the children who live there.

“We are not against the trail,” he emphasized.

Griffin, who has been on the trail job for a year, said the route around Partin’s property was explored but isn’t easily done. He said the county is now looking at a trail right of way through Partin’s land along its southern boundary next to South Prairie Creek.

If that proves feasible, Griffin said the county could move ahead to include condemning the right of way and paying Partin for it. He said the county is surveying the route using aerial photographs because Partin won’t let them on his land.

Partin said officials have been on his property enough over the years to know the land. He contends the county isn’t trying hard enough to miss his property but if they want to come through his place he is willing to sell the whole piece for $6 million.

The site would be perfect for a regional park, he added.

Next door, Doug Dickson said he isn’t sure what is happening since he hasn’t talked to the county since April 2006. He said the offer he received at the time was too low.

“I’m tried of the county not respecting me,” he said, adding that he knows the trail eventually will come through his property not far from his house. Like Partin, though, he wants fair compensation.

Griffin said he will talk with Partin’s attorney and plans to speak to Dickson soon. He made it clear, however, that the trail will go forward next year.

And if that means a courtroom, he said that’s where it will end up. He noted that condemnation proceedings take months, not years. The county moved to condemn a 3.4-acre parcel along Lower Burnett Road last year, a procedure that took four months.